June 2019 saw the 70th anniversary of the original UK release of KIND HEARTS & CORONETS, the jewel in Ealing Studios’ crown, and arguably one of the finest British films ever made. To celebrate this anniversary STUDIOCANAL released a stunning Collector’s Edition as part of their Vintage Classics Collection. The Collector’s Edition includes the restored film on Blu-ray, DVD plus booklet (with contributions from Ealing expert Matthew Sweet), art cards including original costume illustrations and theatrical poster.

Based on the marvellous artwork by Matt Griffin the outer packaging was adapting the poster artwork to fit the cover specs. The challenging aspect was utilising all the resources and imagery across the booklet, art cards to fully do it justice. I tried to use the original opening credit typefaces throughout the booklet and keep the style that Matt created too. I’m really pleased with how everything went together, I think it a lovely set and I thoroughly enjoyed working on the classic film.

Hailing from the Golden-Age of Ealing comedies KIND HEARTS & CORONETS stars Dennis Price as the debonair yet impoverished Louis Mazzini, the would-be Duke of Chalfont whose mother was disinherited by her noble family, the D’Ascoynes, for marrying beneath her. When her dying wish to be buried in the family crypt is refused, Louis vows to avenge his mother and work his way up the family tree, by engaging in the gentle art of murder. One by one he attempts to kill off the eight successors that stand in the way of his becoming Duke – all played by Alec Guinness in an unforgettable tour-de-force performance.

Directed by Robert Hamer (who co-wrote the screenplay with John Dighton) KIND HEARTS & CORONETS also stars Joan Greenwood as the husky-voiced siren Sibella and Valerie Hobson as the refined and virtuous Edith D’Ascoyne, both of whom threaten to distract Louis from his murderous quest.

A wonderfully entertaining combination of biting class satire, hilarious farce and pitch-black comedy, this story of a suave and elegant serial murderer is as sharp and funny today as ever. 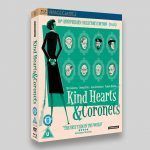 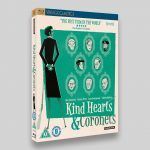 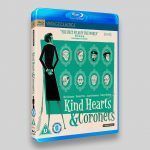 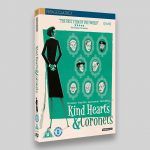 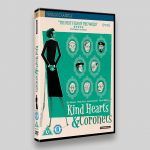